Getting bored by watching Stremio content on a small screen and want to experience the magic of a big screen? Then there is a great way to access all your favorite content on the big screen. In this tutorial, we are going to discuss the simple way to watch Stremio on LG Smart TV.

Stremio offers a variety of content like TV series, Movies, Live TV, and more. Streaming on a mobile phone is convenient whereas playing your favorite TV episodes on a big screen is ultimately an outstanding experience. And you will get more entertainment while watching the content on a larger screen.

Unfortunately, the official version of the Stremio app isn’t available for LG televisions. But, you can watch any movie or show from the Stremio app on your TV screen with the help of the screen share application. Let’s see what steps to cast from the below guide.

How To Watch Stremio on LG Smart TV?

As I said earlier, You can’t install the Stremio app on your TV but you can mirror your screen by using a cast option from your smartphone. Now follow the given steps to cast from your Android phone or tablet using the LG Screen Share option.

First, take your smartphone or tablet and then turn on LG Smart TV. Now connect your Android device and LG TV to the same internet connection.

Next, you need to look for the Screen Share option from your LG TV’s smart menu and then open it.

When you open the Screen Share app, you can find the Listening mode button on the screen. Make sure to turn on the Listen mode option. 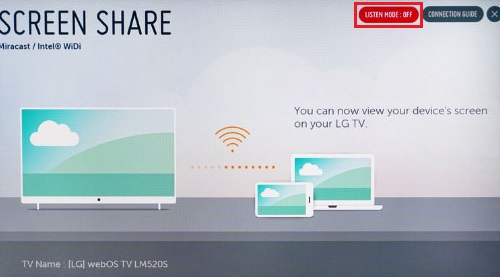 Next, move to the Settings option on your Android device. From there, find out the Cast or Mirroring option to share your mobile screen.

When you see the Cast option, tap on it to open and you will see a list of available devices on the screen.

Now you need to select the LG Smart TV that you want to share your mobile screen.

Finally, you can see that the Android device screen will display to the connected LG TV.

Now launch the Stremio app from your Android phone or tablet and then play a movie to watch on the LG Smart TV.

Also Read: Get the Stremio app on your Android TV

How To Cast Stremio from iPhone & iPad?

Accessing your photos and playing videos from your iOS device to LG TV is very simple. By using the AirPlay option, you can cast your Apple device’s screen on your LG Smart TV.

This method doesn’t work for older versions of LG TVs. If your LG TV is launched after 2018, you can cast your iPhone or iPad screen directly with the help of the AirPlay feature.

For the earlier versions of 2018, you much use third-party applications to mirror your iOS screen to LG Smart TV.

Stremio is the best application to watch all your streaming content from your smartphone to LG Smart TV. All you have to do is follow the above steps and cast your screen on LG TV.

Must Read: How to watch the Stremio app on your Apple TV?